Details can be found on the Meeting Page.

The next QUISCO meeting will be held at St Andrews on Friday 16th June 2017. Details can be found here.

The next QUISCO meeting will take place at the University of Glasgow on Friday 4th December 2015, details here.

We are having our Christmas QUISCO meeting in St. Andrews on Tuesday 10th December. The meeting is going to have a light Christmas atmosphere of introducing new people who has joined us in the recent time. We will have a number of talks, less technical this time but introducing new research topics in quantum information.

The meeting programme is now available.

If you would like to attend, please email Dr Natalia Korolkova for catering purposes. Dr Charles Bennett will be visiting Edinburgh from November 17 and will deliver the Informatics Distinguished Lecture on:

Abstract: The information revolution is based on what a physicist would call a classical view of information. Quantum effects were long regarded as a mere nuisance for information processing, preventing information in microscopic objects from being observed or copied accurately, but are now known to make possible feats like quantum cryptography and, if a quantum computer can be built, dramatic speedups of some computations. More importantly, the quantum approach has led to a more coherent and powerful way of thinking about information.

We review this approach, especially the uniquely strong and private kind of correlation known as entanglement, which plays a role in many ways complementary to classical information. Entanglement helps explain the origin of randomness, why the future is more uncertain than the past, and, paradoxically, the macroscopic world’s superficially classical appearance, which allowed quantum laws to remain undiscovered until the 20th century. 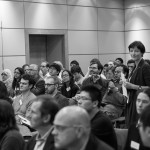 Many QUISCO representatives were presenting at the Institute of Physics Meeting on Quantum Technologies in London 17-18th December 2012. Researchers from Glasgow, Strathclyde, Heriot-Watt and Edinburgh universities gave both invited and contributed lectures on their latest results. 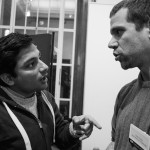 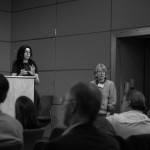 Sabrina Maniscalco (Heriot-Watt, left) showed how a particular form of quantum noise, Non-Markovianity, could be characterised and even used as a diagnostic tool. 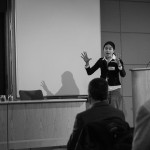 Jacqi Romero (Glasgow, right) explained the phenomenon of orbital angular momentum of light and recent experimental progress on its production and manipulation. 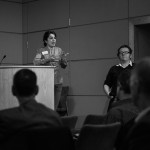 Elham Kashfi (Edinburgh, left) gave an invited talk on the verification of quantum computers. This combines cryptographic secrecy with quantum computation to allow the secure operation of quantum servers. More generally, it tries to answer the question of how do we make sure our quantum devices are performing as promised.

Besides talks, QUISCO members also showed posters presenting their varied research. More photos of the event can be found here.

Outstanding PhD applicants who would like to study in Scotland should look at the SUPA Prize Studentship. Deadline is 23:59 GMT Thursday 31st January 2013.

QUISCO are requesting expressions of interest from quantum information researchers in Scotland to join the management team, help organise events and co-ordinate local institutional activities. If you would like to be considered for these roles, please contact Elham Kashefi.

The next QUISCO meeting will be at the University of Strathclyde on the 7/11/2012 from 11am to 6pm. For directions to the university please see here. Links to campus maps are below.

There is no registration fee but in order to facilitate catering please send a message to quantumschmantum (this is AT google mail) in order to register.

The current schedule is as follows:

The best way into the building is either via the north facing side (which takes you into level 5, or by entering through the Colville building (building 20). Please see this campus map. The room is on level 3.

Abstract: “Quantum information science aims to harness uniquely quantum mechanical properties to enhance measurement, information and communication technologies, and to explore fundamental aspects of quantum physics. Of the various approaches to quantum computing, photons are particularly appealing for their low-noise properties and ease of manipulation at the single qubit level. Encoding quantum information in photons is also an appealing approach to other quantum technologies, including quantum communication, metrology and measurement. We have developed an integrated waveguide approach to photonic quantum circuits for high performance, miniaturization and scalability. We have begun to address the challenges of scaling up quantum circuits using new insights into how controlled operations can be efficiently realised, and demonstrated Shor’s algorithm with consecutive CNOT gates and the iterative phase estimation algorithm. We have shown how quantum circuits can be reconfigured, using thermo-optic phase shifters to realise a highly recongigurable quantum circuit able to perform almost any function on two photonic qubits, and electro-optic phase shifters in lithium niobate to rapidly manipulate the path and polarisation of telecomm wavelength single photons. We have addressed miniaturisation using multimode interference coupler architectures to directly implement NxN Hadamard operations, and by using high refractive index contrast materials such as SiOxNy, in which we have implemented quantum walks of correlated photons, and Si, in which we have demonstrated generation of orbital angular momentum states of light. We have incorporated microfluidic channels for the delivery of samples to measure the concentration of a blood protein with entangled states of light. We have begun to address the integration of superconducting single photon detectors and diamond and non-linear single photon sources. Finally, we give an overview of recent work on fundamental aspects of quantum measurement, including a quantum version of Wheeler’s delayed choice experiment.”

Abstract: “The Universal Blind Quantum Computation (UBQC) protocol allows a client to perform quantum computation on a remote server. In an ideal setting, perfect privacy is guaranteed if the client is capable of producing specific, randomly chosen single qubit states.  While from a theoretical point of view, this may constitute the lowest possible quantum requirement, from a pragmatic point of view, generation of such states to be sent along long distances can never be achieved perfectly. We introduce the concept of epsilon-blindness for UBQC, in analogy to the concept of epsilon-security developed for other cryptographic protocols, allowing us to characterize the robustness and security properties of the protocol under possible imperfections. We also present a remote blind single qubit preparation protocol with weak coherent pulses for the client to prepare, in a delegated fashion, quantum states arbitrarily close to perfect random single qubit states, allowing us to efficiently achieve $\epsilon$-blind UBQC for any epsilon>0, even if the channel between the client and the server is arbitrarily lossy. Time permitting, and conditional on the interests of the audience, additional topics related UBQC will also be discussed.”

Please see this campus map for how to get to the building. The room is on level 5, but other than that there is limited logic to the room numbering, so please follow a local.

“Chaos and disorder for quantum control”

Abstract: “Quantum control is usually expected to be a delicate issue, based on carefully tuning system-specific parameters which then enforce that type of coherent quantum dynamics one is interested in. This in general implies fragile solutions, with respect to uncontrolled perturbations or imprecisions. An alternative route consists in using the eigenstates of complex quantum systems as carriers of robust control. The lecture will present concrete examples which underpin this latter perspective, and discuss possible experimental implementations.”

Abstract: “Non-destructive measurements of the optical field are important for a host of applications in communication, state preparation, and they also give us new tools to probe its quantum nature. Here, we describe a novel type of measurement which implements the ideal projection onto the vacuum or its complement, i.e. not vacuum, but preserving the ideal state in the latter case. For the not-vacuum result, this requires the measurement to obtain no information of the photon number distribution (other than it is greater than zero) even in principle. Conventional approaches suffer from a square root dependence of the coupling to a probe on photon number, hence leading to non-ideal dynamics. Here, we show how an adiabatic transition overcomes this photon number dependence and leads to the unusual non-linearity required. We propose experimental implementations which should be technically feasible given state of art the parameters and simulate the performance of the technique in the presence of decoherence.”

Abstract: “In this talk I will introduce a new method to translate measurement patterns to the circuit model and discuss some applications of it. We start by giving a straightforward circuit representation of any 1WQC, at the cost of introducing many ancilla wires. We then propose a set of four simple circuit identities that explore the relationship between the entanglement resource and correction structure of a 1WQC, allowing one to obtain equivalent circuits acting on fewer qubits. In the second part of the talk, I will show how to optimize arbitrary quantum circuits by using back-and-forth translation between the QC and 1WQC models.”

Quantum Computing and the Limits of the Efficiently Computable

I’ll discuss what can and can’t be feasibly computed according to physical law. I’ll argue that this is a fundamental question, not only for mathematics and computer science, but also for physics; and that the infeasibility of certain computational problems (such as NP-complete problems) could plausibly be taken as a physical principle, analogous to the Second Law or the impossibility of superluminal signalling. I’ll first explain the basics of computational complexity, including the infamous P versus NP problem and the Extended Church-Turing Thesis. Then I’ll discuss quantum computers: what they are, whether they can be scalably built, and what’s known today about their capabilities and limitations.

Lastly, I’ll touch on speculative models of computation that would go even beyond quantum computers, using (for example) closed timelike curves or nonlinearities in the Schrodinger equation. I’ll emphasize that, even if “intractable” computations occur in a particular description of a physical system, what really matters is whether those  computations have observable consequences.

Bringing together Quantum Information researchers from all disciplines in Scotland